SPOILER ALERT: This post reveals key plot points that could detract from your enjoyment of the film if you haven’t seen it.

“You see a girl a couple of times a week, just for laughs, and right away they think you’re gonna divorce your wife. Now I ask you, is that fair?”

As the late Roger Ebert once wrote, “Each film is only as good as its villain,” and “only a great villain can transform a good try into a triumph.” Those words can be applied to many movies throughout cinema history, but none more so than Billy Wilder’s The Apartment (1960) and its villain, J.D. “Jeff” Sheldrake (Fred MacMurray). Sheldrake is the Director of Personnel at Consolidated Life, where our heroes, insurance accountant C.C. “Bud” Baxter (Jack Lemmon) and his crush, elevator operator Fran Kubelik (Shirley MacLaine) are just trying to make their way in the world. Bud is trying to advance his career by making his Manhattan apartment available to company executives, including Sheldrake, for their extramarital affairs. Things get complicated, however, when Bud discovers that Miss Kubelik is Sheldrake’s current mistress.

Sheldrake does not have any redeemable qualities by any means. He is a serial womanizer, a manipulator, and a liar. He has a lack of empathy and treats the heroes as disposable objects to use and forget. Though Bud and Miss Kubelik are flawed individuals, we are able to root for them as Sheldrake makes their lives a living hell because their insecurities are relatable and we can see parts of ourselves in their complexity. Sheldrake’s eventual comeuppance is all the more satisfying when these two heroes triumph in the end.

The villains that intrigue me the most are not the flashy criminal masterminds, but the “average Joe” type. The fact that Sheldrake seems so ordinary on the surface makes his subtle brand of evil even more frightening. Since he’s is a businessman, I thought a resume would be the perfect format to present this sociopathic sleazeball’s, er, accomplishments: 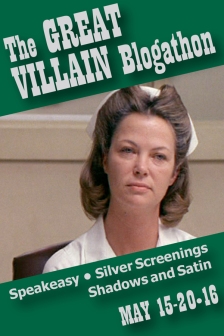 This post is my entry in The Great Villains Blogathon 2016, hosted by Speakeasy, Silver Screenings, and Shadows and Satin.  Click the banner to the left to read the other wonderful submissions.

View all posts by Julia

20 thoughts on “A Villain’s Résumé: THE APARTMENT’s Mr. Sheldrake”

I have no chill when it comes to movies, especially the classics. I watch TCM like it's my job. Former FilmStruck researcher. Current indie film festival programmer.